Flash fiction – Diamonds as big as…

Diamonds as big as… 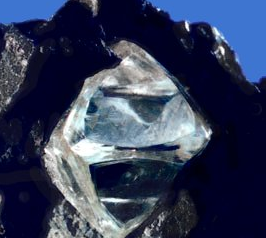 When she said the words, they took him by surprise: ‘Put your hands up – slowly.’

Her voice was quiet but authoritative. Although he had only known of her existence for less than twenty minutes, he already liked what he saw. She was direct, competent, assured.

Her words had arrived from over his left shoulder. Why had he not heard her approach? He turned his head slightly and looked her in the eye. His heart began beating a little faster, but not from fear. He knew that was unprofessional – dangerous even – but he couldn’t help it. He glanced at her hand. Steady as a rock, which he expected. And she was holding the perfect weapon for the job too – nothing that would cause damage to the hull. If she did fire, the SR projectile would knock him off his feet. A headshot might even kill him, or take out the one good eye that still remained after the drill bit accident on the surface of ’55 Cancri e’. He could always pay for new ones  – if he made it back to Earth; but for now, the best option was to go with the flow. And anyway, he was a mining engineer, not some off-world, space-colonizing, gung-ho commando.

‘Take it easy: BASSEY don’t pay me well enough to take an SR round,’ he said. He brought his hands away from the telecom switch, the link between the mining ship and BASSEY’s distant headquarters on Earth.

‘Now face me. And keep your hands up,’ she responded.

He turned, opening his palms towards her.

He could smell her – a faint, sweet smell that reminded him of…

‘Wipe that grin off your face.’

He tried. ‘What’s all this about?’ he asked.

He nodded. No use playing dumb: that was an insult to her intelligence. And there was no doubt that she was smart: she and her crew had taken his ship with no lost of life – yet. He took a deep breath. ‘So. Now what?’

With a toss of her long red hair, she answered: ‘We are going to take a little walk.’

‘Airlock?’ he wondered. That was more than a little depressing. ‘Ship’s quarantine ward?’ That was slightly more cheering. ‘Short or long plank?’ he finally asked.

‘Very funny,’ she replied, and with a twitch of the SRB, indicated that he was to walk in front of her.

As they left the forward control chamber, two members of her crew came towards them. One, a tall man with legs like stilts and a jutting chin, spoke: ‘The rest are there already, Captain.’

He glimpsed her nod curtly – and then he felt the dangerous end of the SRB lodge itself in his back. He accepted the invitation to walk a little faster.

Before long, they had passed through the crews’ quarters, the main gym, and the outer edges of cargo bay 2. It seemed they were heading in the general direction of the link module; and he was beginning to think that his initial guess – that they would demand access to the main storage areas, take their share of the planet’s riches and then depart – was looking unlikely.

‘Aren’t you going to ask me for the access codes?’ If they wanted to get into the storage tanks – he reasoned – they’d need those…unless they had heavy cutting gear.

He took a quick look behind.

He kept my eyes front after that.

Through one airlock and quarantine bay after another they went, traversing the ship from its control module to its crews’ quarters to its storage tanks.

The link module was the only place of importance they hadn’t yet visited. If the ship had a backdoor, the link module would have been it. It was also where the other ship had docked, and it was from there that they had launched their successful coup. At least, he assumed it was successful.

At the final airlock before the link, she stepped through with him. As the blast doors closed and the air voided, she turned and spoke – and again he marveled at eyes the colour of jade.

‘Are you familiar with Earth’s history, Mr…’

The air rushed in again; and they stepped out the containment area as the two members of her crew step into the air lock behind them. ‘There is a grave in south London,’ she continued with the SRB pointed at his chest, ‘of a man who died over 400 years ago. He was cast adrift in the ocean in a tiny boat; but because of his navigational skills, he saved himself and his crew.’

He didn’t like where this conversation was going. The smile on his face had rapidly begun to disappear. They were joined by three more of her crew and together the seven of them entered the link module’s docking bay.

‘Well, Mr. Yarlson,’ she said as the docking bay alarms began to flash, ‘I’m afraid it is time to say goodbye. You’ll find the rest of your crew on our vessel.’

He gave her a puzzled look.

She shrugged. ‘It’s an old ship – the navigational equipment is poor and this one is much faster. Also, there’s no point in transferring the diamonds when we can simply steal the ship.’

He couldn’t argue with her logic. But he was feeling anxious – and the reference to a historical figure had puzzled him.

‘You didn’t tell me your name,’ he said, stepping into the final airlock between the mining vessel and the other ship. He faced her as its door began to slide downwards.

‘Sarah,’ she called as she disappeared from sight, ‘Sarah Bligh.’

Error: Twitter did not respond. Please wait a few minutes and refresh this page.

Adaptation A Fight with a Ghost A Strange tale Audio Books in print Country of the Blind Fish and chips Flash fiction General information Halloween activity Mr Mint News Sweet tooth activity The Blind Man The Cook activities The Five Orange Pips The Great Glen Way The Janitor activities The Janitor audio The Lake Activity The Monkey's Paw The Piper activities The Purple Pileus The Red Room The Treasure in the Forest
Loading Comments...
Comment
×
<span>%d</span> bloggers like this: