Leave a comment
By Scott The Great Glen Way

The next morning, Neville takes us back to South Laggan and we start walking again. Today is a shorter walk. It is only 14km. We are walking beside Loch Oich and following an old railway line and one of General Wade’s old military roads.

The canal is busy today. There are lots of boats waiting in its locks.

At Bridge of Oich, we stop. It is an unusual bridge. It is made of granite and iron and was built in 1849. Because there was a danger of floods, James Dredge, the bridge’s designer, built a bridge with a single span across the River Oich. He used a cantilever design. The bridge has two separate parts; so if one part falls down, the other should stay up. 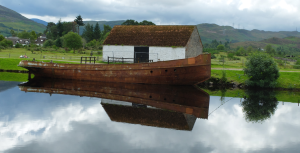 Near Fort Augustus, the sky begins to darken. A few drops of rain fall. But we are lucky again. The heavy rain only comes later in the evening when we are indoors.There are five locks near Fort Augustus. Today, many people in the village are using them as bridges to cross from one side of the canal to the other.

Before we find our accommodation – Sonas bed and breakfast, the home of Jimmy and Lorna Service – we walk through the town and find a seat beside Loch Ness.

Our journey starts there tomorrow.

Error: Twitter did not respond. Please wait a few minutes and refresh this page.

Adaptation A Fight with a Ghost A Strange tale Audio Books in print Country of the Blind Fish and chips Flash fiction General information Halloween activity Mr Mint News Sweet tooth activity The Blind Man The Cook activities The Five Orange Pips The Great Glen Way The Janitor activities The Janitor audio The Lake Activity The Monkey's Paw The Piper activities The Purple Pileus The Red Room The Treasure in the Forest
Loading Comments...
%d bloggers like this: